“When a man’s ways please the LORD, he maketh even his enemies to be at peace with him.”  Proverbs 16:7

Read the Key Verse with your students.  It is very self explanatory.  But be sure that they understand – God is with those who please Him, and He will take care of His people.  We will see this in David’s life as we study our lesson for today.

Summary After learning of Eli, Samuel, and Saul, we come to the final main character of I Samuel, David.  Last week we saw that the people had rejected God as their king and desired a man to rule over them.  God gave them Saul – physically, everything a people could want in a king.  He was good looking, and he stood head and shoulders taller than anyone else.  But we found he chose to please man over God.  Remember Saul’s disobedience that caused God to remove the kingdom not only from him, but his family.  Today we see that God chooses a “man after his own heart.”  We see God take a man the world might see as one of low esteem (a shepherd boy), but one whom He raised up to serve Him.  When God chose David, he removed his spirit from Saul and allowed an “evil spirit” to trouble him.  Watch today and notice the conflict between these two men.  Notice that even though Saul sought to destroy David, when David walked with God, Saul could not destroy him.

Emphasis:  As we see God turn from Saul (for his disobedience) to David, Saul then became David’s enemy, after him at every turn.  We read that David continually sought God, and that even Saul recognized God was with David.  When David had opportunity to kill Saul, and would not, Saul promised David peace.

One idea for today’s lesson:  (See picture below).  For today’s we made a coloring book for each child.  Because David was a shepherd boy God chose to be the future king of Israel, there were many choices of coloring pages (some of the most famous are pictures of David fighting Goliath).  I chose some that told the story of David.  I had a book of construction paper cut and stapled together for them to glue the different pictures into in the correct order.  We colored some of the pictures in them with the time we had left.  They were then able to take their books home to color the rest of the pictures as they had time, helping them remember what we had learned in class that day. 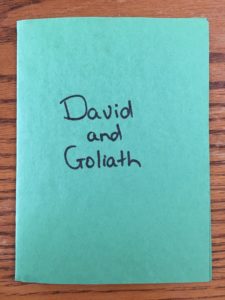