“He that overcometh shall inherit all things; and I will be his God, and he shall be my son.” Revelation 21:7

Summary:  In this lesson we look at the life of Jacob, the 3rd major person in the book of Genesis..  He and Esau were twins.  Jacob was the younger twin born to Isaac.  God knew before Jacob was even born what kind of a man he would become; for he chose to walk with God.  Because God had told Rebekah that Jacob would rule over Esau, she encouraged him to trick his father out of the family blessing, preempting God’s plan.  This caused contention, hatred, and grief from his brother for many years.  Jacob had to flee for his life to another land.  On the way, Jacob had a dream of angels ascending and descending a ladder into heaven.  God spoke to him and gave him the promise of Abraham.  Jacob obeyed his parents and chose a wife from his mother’s family.  But, Jacob was then tricked by Laban, his mother’s brother, who gave him the wrong daughter, Leah, in marriage.  Jacob had to work 14 years to gain the woman he loved, Rachel, Leah’s sister.

When God told Jacob to return to his homeland, he obeyed.  On the way, he wrestled with an angel of the Lord all night.  It was the pre-incarnate Christ.  During that struggle, Jacob was renamed Israel (which means prince of God).   God blessed Jacob with 12 sons and 1 daughter.  These sons became the 12 tribes of the nation Israel.

In the past two lessons, we saw where God promised to send One who would deliver a sinful people from their sins.  The first was when man sinned in the Garden (Genesis 3:15).  Last week, we learned that God had promised Abraham that all people would be blessed through his descendants (Genesis 22:18).  We even saw a picture (when Abraham offered Isaac) of what God would do – lay down the life of His Son, Jesus.  In this lesson, we see once again the promise of a mighty Deliverer that would come (Genesis 28:14).  Remember God’s promise was fulfilled when He sent His Son, Jesus, to save the world from their sin. Jesus was the greatest gift ever given.

One idea for today’s lesson:  (See picture below). Take a piece of black construction paper, some wooden popsicle sticks, peel and stick stars, a sticker of a Bible times man, a sticker of a rock and some angels, some cotton balls and glue.  Glue the wooden popsicle sticks to the paper making a ladder.  Fluff the cotton balls and glue them around the top to make a sky.  Put the rock sticker on the bottom with the Bible time’s man (as if he is using the rock as a pillow). Stick the angels on the ladder (as if ascending and descending on the ladder).  Fill the night sky with the stickers of stars.  Glue a print out of Genesis 28:15 on it. 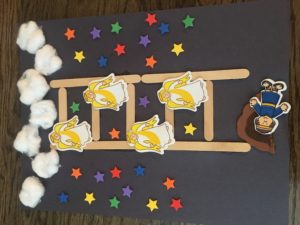